I have been on social media for most of my adult life. I joined Facebook in its infancy, back in the days when it was only available to college students. This was before News Feed, before Likes, before constant sharing became the norm.  Without it, there are many people that I would have lost touch with over the years.  A combination of time, distance, and casual acquaintances would have made my world much smaller.  Instead, the net of people is wide. Are all of the relationships deep?  Of course not. But we share to remember that we are not alone. People can relate, empathize, learn, and judge from our experiences.

I shared the loss of my babies within the first few hours of learning that they were gone.  Checked into the hospital, but prior to the induction of labor, the news was out there. We had made the necessary calls, emails, and texts to family and closest friends, so this was the next natural extension.  It was a way to “tell everyone” and not need to repeat ourselves over and over. As labor began and the torturous wait, the flood of reactions and comments were comforting.  They reminded me that I was not alone; that if even for a brief moment, someone was thinking of me, often people that I was not particularly close to, but still took a moment to express condolences. 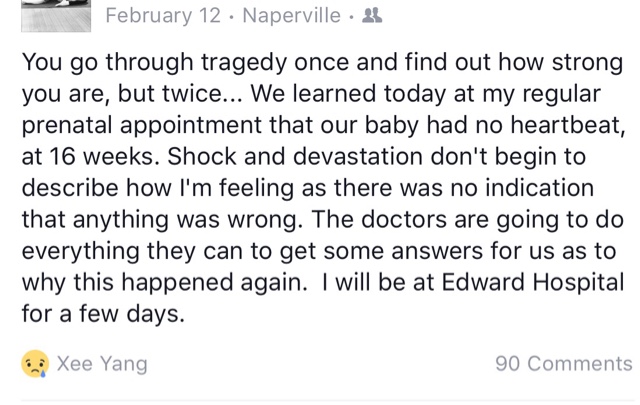 I was ill-prepared for the realization that many of these acknowledgements were the equivalent of a “drive-by”.  A momentary slow-down and craning of the neck to view an accident, and then quickly speeding up and moving on. This would have occurred outside of the realm of social media: the sympathetic “I’m sorry” phrases would have become fewer and farther between.  It induced isolation.

I was writing about my grief. I could “see” that people were reading, but the outward acknowledgements in the form of a Like or a Comment became fewer.  The isolation spread.  Yet, I kept writing about the grieving process as my own necessary therapy.

And eight months later, people are still reading. The “drive by” evolved into slowing down to ask if I am ok.  Writing has become a deeper form of sharing, and reading a form of acknowledgment.  The story means something, to someone, if only in the few minutes it takes to read, and then they drive away to their own destinations.  But they stopped to read.

I have storage totes for my kids with hanging folders - one for each school year. I usually tuck in a few handwriting samples, projects or papers they worked hard on, and artwork.
I've always heard that Starved Rock is breathtakingly beautiful but in the 11 years we've lived in Illinois, we had never visited this state park. Until today.
Fall in Chicagoland does not disappoint.
Another trip around the sun. My birthday included a midday walk with my hubby and carrot cake (one of my favorites) after dinner.